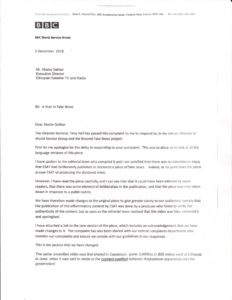 The British Broadcasting Corporation (BBC) has corrected its “A Year in Fake News” story on ESAT that had given readers the impression that ESAT had doctored a video showing “Somalis thrown into shallow graves.”

The video in question was used by a producer in a journalists’ roundtable on a Facebook Live discussion in July but failed to verify its authenticity. The intention of the producer was only to show the wicked nature of ethnic conflict. Having found out that the video was doctored by other parties to falsely depict Somalis being thrown into graves by Oromos, the editorial team of ESAT had immediately removed the video and apologized for the unverified use of footages by a rookie producer. 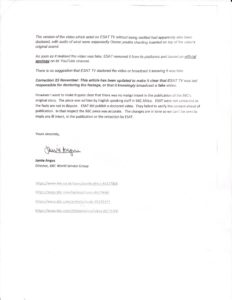 “A Year in Fake News” story by the BBC published on November 12, 2018 however said ESAT had doctored the video and that it resulted in deadly attacks on Oromos living in neighboring Djibouti and Somalia.

In a letter to Tony Hall, BBC’s Director-General, ESAT’s Executive Director, Abebe Gellaw said the report by the BBC’s Africa Desk was “unfair, unbalanced and biased,” and it misled readers that ESAT was the producer of the doctored video.

In a response to Gellaw’s letter, Jamie Angus, Director of BBC World Service said a correction has been made in the archived news story “to make it clear that ESAT TV was not responsible for doctoring the footages.”

Abebe Gellaw still insists merely making corrections in an archived story was not enough and he demands an apology from the BBC. He said ESAT should not have been in the list in the first place for an ordinary mistake by a producer, which the editorial team had taken an immediate action of removing the footage and apologizing for the use of unverified content.

Despite Jamie Angus’ letter that said “there was no malign intent in the publication of the BBC’s original story,” and that “the piece was written by English speaking staff in BBC Africa,” ESAT’s editorial team wants the BBC to further look into the intention of some of the staff in its Horn of Africa section.