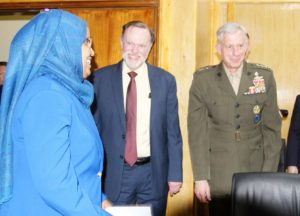 US Assistant Secretary of State for African Affairs, Tibor Nagy is in Addis Ababa for an official working visit as part of his tour to East Africa.

Nagy and General Thomas D. Waldhauser, Commander of U.S. Africa Command (AFRICOM), met with Ethiopia’s Minister of Defense Aisha Mohammed to discuss opportunities for security cooperation between the United States and Ethiopia, according to the U.S. Embassy in Addis Ababa.

“It shows you what one courageous, visionary leader can do to impact not only her or his own country, but the region,” Nagy said speaking about Ahmed who is credited for reforms in his country and ending a two decae old animosity with Eritrea.

“Now the waves are kind of washing over other parts of the region. I mean, during my discussions with African leaders, I pointed to Ethiopia as – what a positive force can mean for Africa.”

It is Nagy’s first visit to Ethiopia since his confirmation in July. He served as U.S. Ambassador to Ethiopia from 1999 to 2002.