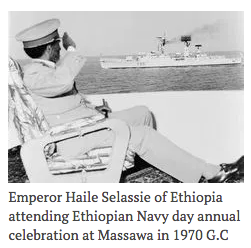 Ethiopia says it will rebuild its navy on the international waters of Red Sea and Indian Ocean 27 years after it became landlocked following the independence of Eritrea and the ensuing disbandment of its once strong navy.

Deputy état-major General Berhanu Jula told the Ethiopian News Agency that the country, which once had Africa’s leading navy, is now envisioning to establish a modern navy force to augment its defense force. He said it was high time that Ethiopia, like other regional forces, made its military presence in the region.

Several countries in the gulf have shown interest in building military stations in the Horn of Africa region, he said.

Rich gulf countries have recently moved to establish ports and military installations in the waters of the region and in countries like Somaliland, Puntland, Djibouti and Eritrea.

The état-major said his country needs a strong navy that would defend any aggression.

Ethiopia established its navy in 1958, then called the Imperial Ethiopian Navy. It was disbanded following the independence of Eritrea in 1991 as the country became landlocked.