Ethiopia: Over 40 officials of corruption riddled METEC, members of intelligence under arrest 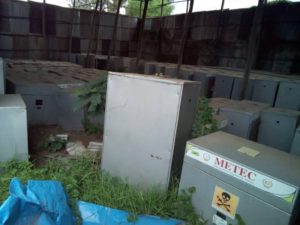 The Reporter Newspaper published in Addis Ababa broke the news this morning of the arrest of over 40 officials of the Metals and Engineering Corporation (METEC) and members of the Ethiopian security and intelligence.

Established in 2010, METEC, the country’s military industrial complex, was run by army generals of the Tigray People’s Liberation Front (TPLF) until recently. Its CEO for the entire eight years, Maj. Gen. Kinfe Dagnew, had just resigned in April when a new Prime Minister, Abiy Ahmed, took over political power from the TPLF.

ESAT sources also say METEC has also wasted hundreds of millions of dollars in producing defective and below the standard machineries and smart meters to the Ethiopian Electric Corporation.

METEC has, since its inception, been run by TPLF army generals who are accused of high level corruption and embezzlement.

METEC found itself in hot water after failing to construct and deliver ten government sugar factories worth 3 billion dollars, even after it had received payments.

ESAT sources at the Commercial Bank of Ethiopia revealed in June that the government’s sugar Sugar Corporation squandered 2.8 Billion dollars without completing any of it sugar projects. Sources at the Bank also revealed METEC has borrowed about 436 Million dollars.

According to The Reporter, the about 40 officials of METEC and members of the intelligence were detained after they were called for a meeting in one of the corporation’s office buildings in the area locally known as Gerji, near the Imperial Hotel.

The Newspaper, quoting its sources, said the officials and intelligence officers have been transferred to the headquarters of the Addis Ababa Police Commission, which doubles as a temporary jail for the Federal Police.