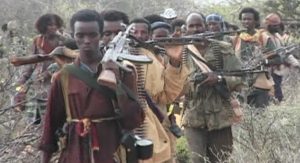 The Ogaden National Liberation Front (ONLF) has officially laid down arms and combatants of the Front have returned to Ethiopia from their base in Eritrea. The move followed a peace agreement reached with the Ethiopian government in Asmara last month.

Abdulahi Hussien, media advisor to the regional president, told ESAT that the return of the ONLF to a peaceful political struggle has been welcomed by the people and government of the Somali people. He said the return of ONLF would augment the ongoing positive political reforms in the country.

Meanwhile, Mr. Hussien said the youth group known as “Hego” which was formed by the ex-regional president Abdi Illey to destabilize the region, has been rooted out. Abdi Mohamed Omer, a.k.a. Abdi Illey was arrested in August for violations of human rights, inciting ethnic and religious conflict in the Somali region.

The regional government revealed a week ago that several mass graves have been found with hundreds of bodies. It said it is finalizing a report on the discovery of the mass graves and would be made public soon.