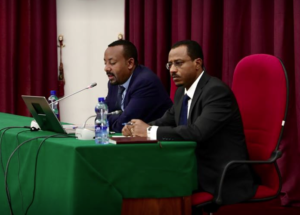 The Oromo Democratic Party (ODP), a party governing the Oromo region in Ethiopia, vows to continue its fight against what it called elements that are bent on inciting ethnic violence that led to untold suffering and loss of lives in the region and beyond.

In a statement issued at the end of an emergency central committee meeting yesterday, the ODP said those elements that are no more benefiting from their illegal business practices due to the crackdown on corruption have now turned into instigating violence among ethnic groups to reverse political reforms in the country.

The meeting led by Prime Minister Abiy Ahmed, who is also chairman of ODP and his deputy, Lema Megersa in a statement said ther regional government will continue its legal actions against perpetrators of human rights abuses and organized crimes as well as against systemic corruption.

The statement said that institutions of higher learning have been targeted by instigators of ethnic violence.

The statement by ODP came amid increasing ethnic violence in Moyale, Chinaksen and Babile as well as in institutions of higher learning where dozens of people, including police officers have lost their lives.