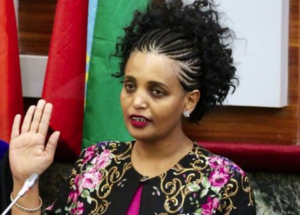 Ethiopia’s new head of elections has vowed to make the electoral board an institution that would be trusted by the people in conducting free and fair elections.

Birtukan Mideksa, who was elected yesterday by the Ethiopian parliament to lead the country’s electoral board says the public had lost trust on the institution that oversaw several sham elections in the past.

Speaking to ESAT from Addis Ababa, Ms. Mideksa said she has seen positive progress by the government in forming institutions of democracy and the electoral board was one such institution.

She said there are hopes but also mixed feelings of fears in the country’s future; but it will be the responsibility of every citizen to further changes in the country.

Asked if her former role as a leader of a political party would have an effect on her current job, Mideksa said she would “work without prejudice and without favoring this or that group.”

“It would be betraying myself and violating standards i set for myself if i do otherwise,” she told ESAT.

The former judge and leader of an opposition party was thrown into jail twice following the 2005 elections where at least 200 people were killed in post election violence when security forces opened fire at demonstrators demanding their votes be respected. International electoral observers declared the election was tainted with vote fraud and irregularities.

Ms. Mideksa lived in exile in the United States for several years until a reformist Prime Minister, Abiy Ahmed nominated her to lead the country’s electoral process.

Her appointment has been seen as one of a series of measures taken by Mr. Ahmed in forming institutions of democracy. Mr. Ahmed last week appointed a prominent and respected lawyer, Meaza Ashenafi, also a woman, as President of the Supreme Court.

Last month, the young Prime Minister drew international headlines when he appointed women in half of the positions of his cabinet.