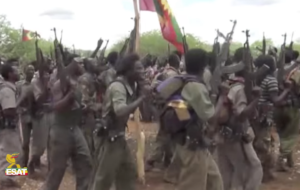 Germany is to finance the demobilization and return to civilian lives of the about 35,000 soldiers of opposition political groups that have recently returned to Ethiopia from their base in Eritrea.

Ahmed Shide, the newly appointed Minister of Finance, who has just returned from a visit to Germany, accompanying Prime Minister Abiy Ahmed’s visit to Europe, told reporters in Addis Ababa that Germany has pledged to provide technical and developmental assistance to demobilize the about 35,000 combatants of opposition groups.

Most of the returned soldiers have checked into military camps based on agreements with the government but reports that combatants of the Oromo Liberation Front (OLF) still roam around in the south and western part of the country have been a great concern to the government.

On Friday, Ethiopian government forces clashed with combatants of the separatist OLF in Borena, Southern Ethiopia.

According to ESAT sources, at least five government forces were killed in the fight while about 30 OLF soldiers were injured. There have also been reports of casualties on the OLF side, although exact figures were hard to come by.

Repeated calls by the government for the OLF to disarm its soldiers have fallen on deaf ears.