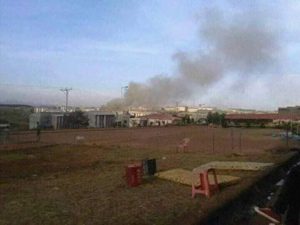 A fire has reportedly broke out today at a building in Assosa University campus in Western Ethiopia.

The University had seen deadly violence last week in ethnic motivated attacks when a small quarrel between two students turned deadly on Wednesday. Three students were killed and thirty-four were wounded.

The deadly violence in Assosa is said to be a triggering factor for conflicts in four other Universities.

A delegation from the Ministry of Science and Higher Education was in a meeting with the administration of the University to seek solutions to the crisis in the campus when the fire broke out. 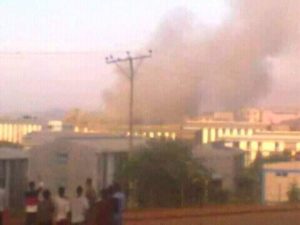 The Minister of Science and Higher Education, Dr. Hirut Woldemariam told ESAT yesterday that her Ministry has devised ways to prevent violence in the future. She also said that on Sunday, after a meeting between students mediated by elders, normalcy has been restored in the campus.

Dr. Hirut said higher institutions of learning have been targeted by elements that are bent on inciting ethnic conflict and and reversing the ongoing political reforms in the country.

Meanwhile, a person suspected of instigating the violence at the Assosa University was arrested yesterday. The suspect was arrested with two kalashnikovs, a dozen ID cards and other documents of interest to the police.

The city police department also said they have arrested three police officers who had allowed the suspect to go to his residence, after he had been in their custody, under the pretext of collecting his medications. The suspect had reportedly drew one his kalashnikovs in an attempt to shoot the police officers, who rein him in.