Ethiopia: Dramatic arrest of lead corruption suspect as he tries to flee country 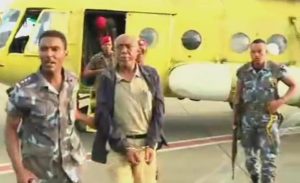 A retired army Major General who led the country’s military engineering and industrial complex for eight years has been arrested in Ethiopia’s border town of Humera as he tried to flee the country.

Maj. Gen. Kinfe Dagnew has been arrested, picked up by a helicopter and flown into Addis Ababa soon after he was caught in Humera as he tried to escape to the Sudan.

An arrest warrant was issued yesterday on Maj. Gen. Kinfe Dagnew and a number of other high level officials and army generals whom the government says were responsible for the embezzlement of millions of dollars, nepotism, favoritism and mismanagement of the country’s military industrial complex – the Metals and Engineering Corporation (METEC).

Maj. Gen. Dagnew was the CEO of METEC, an industrial complex at the center of a corruption scandal.

Several army generals and officials running various departments at METEC have been arrested in the weekend crackdown by the government of Abiy Ahmed, who has vowed to fight corruption and nepotism when he took office in April. Kinfe dagnew tendered his resignation as soon as Ahmed took office in April.

About 40 officials of METEC and members of the intelligence were arrested in Addis Ababa on Friday.

In an exclusive interview with ESAT, Brigadier General Melaku Shiferaw, who lives in exile in the United States, said Kinfe Dagnew has squandered millions of dollars in kickbacks, illegal award of contracts and illegal purchases among other crimes.

Bir. Gen. Shiferaw said Dagnew has illegally benefited his family members, in-laws and friends paying them millions of dollars in kickbacks and in awarding contracts without bid.

According to Bir. Gen. Shiferaw, some of the projects outsourced by METEC have been paid in full but never completed and materialized.

Established in 2010, METEC, the country’s military industrial complex, was run by army generals of the Tigray People’s Liberation Front (TPLF) until recently.

ESAT sources also say METEC has also wasted hundreds of millions of dollars in producing defective and below the standard machineries and smart meters to the Ethiopian Electric Corporation.

METEC has also failed to construct and deliver ten government sugar factories worth 3 billion dollars, even after it had received payments in full.