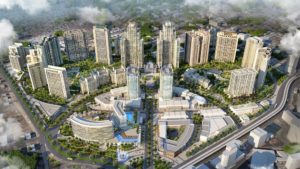 An integrated residential project was launched today at the historic La Gare (Train Station) in the capital Addis Ababa.

A key component of the project was building residences for the 1,600 citizens to prevent eviction from their village.

Prime Minister Abiy Ahmed, who led the groundbreaking ceremony said it was crucial that a development project does not evict people from their homes and not disrupt their social fabrics. “The plan is to build a futuristic city while preserving historic sites and communities,” Ahmed said.

The project is situated on the historic La Gare (Train Station), where the Ethio-Djibouti railway was built 100 years ago. Dr. Ahmed said the building of the railway station will be renovated and remain as a museum.

Eagle Hills, an Abu Dhabi-based private real estate development company, will own the lion’s share of the project, with the government having 27% shares.

“Having the government involved in joint ventures is crucial to follow up projects and to ensure that the city gets the revenue it expects when projects becomes operational,” the Prime Minister noted.

Chairman of Eagle Hills, Mohamed Alabbar, said on the occasion that his company will do all it can to make sure the project is a success.

“In addition to creating a brand-new skyline and city centre, La Gare is set to contribute to the local market by creating jobs, further bolstering market sentiment and energizing the economy,” Alabbar said.

The La Gare integrated project is comprised of residential, offices, mall, entertainment and other facilities including a park.