Ethiopia: Abiy Ahmed’s ODP to merge with opposition against bylaws of EPRDF 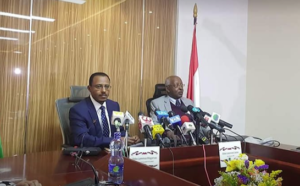 Lemma Megersa (left) and Lenco Latta at the signing ceremony

In what is seen as a challenge to the ruling EPRDF and its bylaws, Abiy Ahmed’s Oromo Democratic Party (ODP) has signed a memorandum of understanding with a leading Oromo opposition party, the Oromo Democratic Front (ODF), to eventually merge as one.

Leaders of the ODP, a member of the ruling EPRDF and ODF, an opposition party, signed the MoU in Addis Ababa today agreeing to form a technical committee that will work on the details before the parties are unified.

The ODP, formerly the Oromo People’s Democratic Organization (OPDO), is part of the four member coalition of the ruling EPRDF. The bylaws of the EPRDF does not allow member parties to from any kind of unity with other parties, let alone with an opposition party. By forming unity with the ODF, the ODP is boldly challenging the EPRDF, whose revolutionary democracy and democratic centralism principles were supposed to remain unchallenged.

The EPRDF, a coalition of four ethnic parties, has been in power since 1991. It has been dominated by the Tigray People’s Liberation Front (TPLF), whose ruling elites controlled the politics, economy, intelligence as well as the military until a young and reformist Prime Minister assumed office in April.

“The Prime Minister, Abiy Ahmed and his ODP, are doing everything against EPRDF and its bylaws; and have technically began dismantling the EPRDF,” says one political analyst. Dr. Abiy, who is chairman of ODP, was elected chairman of the ruling EPRDF in March and automatically became the Prime Minister in April after a tough infight within the Front.

The ODF is formed by former leaders of the Oromo Liberation Front (OLF). Lenco Latta and co left the OLF, a separatist group that was fighting for the independence of the Oromo region and established ODF in 2013.

The ODF believes the political demands of the people Oromo should be resolved within the context of the bigger Ethiopia and renounce separation as a solution. Leaders the ODF were the first of exiled opposition groups to return to Ethiopia in May after a call made by Prime Minister Abiy Ahmed to all opposition groups abroad, armed or otherwise.

Speaking on the occasion, Megersa said political parties with similar programs should come together in a bid to help speed up political reforms underway in the country.

Mr. Latta said on his part that the unification of Oromo parties would contribute to the nation building process. Latta called on other parties to follow suit.

There are over 10 Oromo political groups and a total of over 70 political parties in Ethiopia. At a meeting with the leaders of the parties yesterday, Dr. Ahmed encouraged them to merge into three or four parties, which he said would help make the political reform process efficient.

Dr. Ahmed turned Ethiopian politics on its head as soon as he took office in April. He invited exiled and armed opposition groups to join him in for a peaceful political process. He made peace with neighboring Eritrea, ending two decades of animosity and resuming business and transportation.