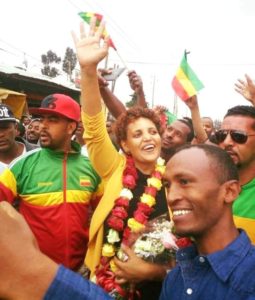 A former opposition political figure who returned home after seven years in exile said now that there are positive changes in her country, she will work for the establishment of institutions crucial for guaranteeing and sustaining democratic rights, justice and freedom of the press.

Birtukan Mideksa was once the popular leader of the opposition in the 2005 controversial elections where members her party, including her, were thrown into jail.

She was imprisoned twice by the government of the late Meles Zenawi, who oversaw the imprisonment and torture of members of opposition political parties, critical journalists and thousands who oppose his rule.

She was forced into exile and lived in the United States for seven years. Birtukan received a hero’s welcome in Addis Ababa where in her brief statement to local media, she said she returned home convinced that there were some changes in her country.

“In order to guarantee that the rights of citizens is respected and rule of law prevails, we need institutions of democracy to sustain them,” she told reporters in Addis Ababa.

“There are no political prisoners at the moment. Journalists are no more in jail. We need to establish institutions that will work to ensure that it will remain that way.”

A former federal judge, Mideksa was also a founding member of Unity for Justice and Democracy (Andenet) and vice chair of the Coalition for Unity and Democracy (CUD).

Asked if she had accepted an offer from the government that she would be leading Ethiopia’s Electoral Board, based on rumors in the political grapevine, Mideksa said she had no comment on that.