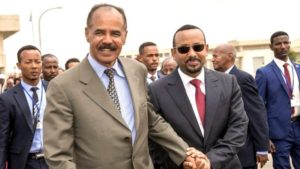 As the United Nations is set to lift a nine year old sanction on Eritrea, its unwavering president, Isaias Afwerki, says the recent peace between Ethiopia and Eritrea represents a new epoch and political dynamics in the Horn of Africa region and beyond. Afwerki vows to consolidate the peace process in the region that began when a new Prime Minister in Ethiopia, Abiy Ahmed, extended an olive branch to end two decades of animosity shortly after assuming office in April.

Next week, the United Nations will lift a sanction imposed on Eritrea in 2009, accusing the East African country of aiding a Somali jihadist group, al-Shabaab. The sanction involves an arms embargo, travel bans on its leaders, and freezing assets of some of its officials. But in more than one occasion, a United Nations Monitoring Group stated in reports that “it had found no evidence of direct Eritrean support for al Shabaab.” Despite the findings of the Monitoring Group, the sanctions have continued, with Eritrea accusing the United States of being the main force pushing for continuation of the embargo.

The U.S. has now backed down from its position with its national security advisor, John Bolton, supporting a draft proposal by the United Kingdom for the lifting of the sanctions, according to reports.

“The final decision will be made on 14 November this month; but the early signals coming out from New York are positive indeed. Tribute to the Eritrea’s steadfastness and resilience for nine long years,” said Eritrean Minister of Information, Yemane G. Maskel in a tweet over the weekend.

Regional analysts say Eritrea’s recent peace deal with Ethiopia that ended two decades of no war no peace situation and its efforts at peace with neighboring Djibouti and Somalia have led to the lifting of the sanctions.

At the UN General Assembly in September, Ethiopia, Somalia and Djibouti called for an end to sanctions on Eritrea.

Meanwhile, Eritrean President Isaias Afwerki said that “utmost preoccupation of government and people of Eritrea is consolidation of peace process that has ushered in a new epoch,” according to a translation of his exclusive interview with the national broadcaster by G. Meskel.

Eritrea gained its independence from Ethiopia in 1993; but five years later, war broke out between the two countries over a disputed territory. A two year trench war claimed the lives of some 80,000 people in 1998-2000.