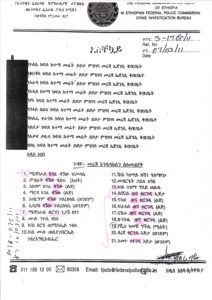 The crime investigation bureau of the federal police commission sent a letter to ten offices of land administration in the capital to identify and compile information on over 400 suspects of corruption while it put a freeze on their land and property until further action by courts, according to a document sent to ESAT.

The letter by the federal police lists names of 413 suspects. Among the suspects were Major General Kinfe Dagnew, the former CEO of METEC, who was arrested last week while trying to escape to the Sudan. He is accused of squandering millions of dollars in illegal contracts, purchases and nepotism at the military industrial complex. The list includes his sister, two children and two brothers.

The land and property belonging to Getachew Assefa, the former spy chief who is now a fugitive and his daughter; as well as his deputy, Yared Zerihun with 17 members of his family have also been ordered to be on hold. Yared Zerihun was arrested last week.

Also in the list were Maj. General Berhane Negash, a former Minister d’État for the country’s defense ministry, who is also suspected of high level corruption and human rights violations. ESAT sources said last week that Maj. Gen. Berhane Negash is in hiding in his home town Mekelle, the capital of Tigray region.

Also included in the list were several army commanders, businesses and other individuals suspected of illegal land grab in the capital.

The city administration last week seized land that was sitting idle for years after it had been leased by investors and builders.

Also last week, the Federal Attorney General has frozen the bank accounts of 147 suspects of corruption. The list includes Maj. General Kinfe Dagnew. The crime investigation bureau of the federal police commission had also requested banks to freeze accounts of 58 members of the intelligence who are accused of human rights violations. It includes Getachew Assefa and his daughter Leelti Getachew Assefa.

In a major crackdown against corruption and violations of human rights, Ethiopia has arrested about 70 suspects in the last two weeks. Its reformist Prime Minister, Abiy Ahmed, has vowed to stamp out corruption at its root and clean up the army and intelligence that have been tainted with corruption and human rights violations in the over two decades of rule by the Tigray People’s Liberation Front (TPLF) that has now lost its grip on military and political power.