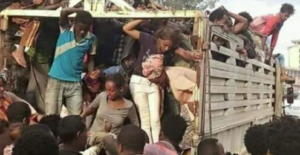 At least 20 people have been killed and about 50,000 displaced over the weekend in areas bordering the Oromo and Benishangul Gumuz regions.

The weekend violence followed the killing of four officials from Benishangul region in an ambush in the Oromo region on Wednesday.

The officials were returning home from a joint security meeting in western Wellega when they were ambushed. That incident sparked what victims described as revenge attack on Oromos and Amharas living in areas bordering the two sides.

Thousands flee their homes fearing retribution. Close to 200 houses were set ablaze in neighboring areas between the two regions.

Regional officials deny the attacks were ethnic motivated. But they say the attackers carry flags and emblems of the Oromo Liberation Front (OLF).

Leaders of the separatist group have recently returned to Ethiopia in line with the call by Prime MInister Abiy Ahmed made to all opposition groups in exile to return home and peacefully participate in the countries politics.