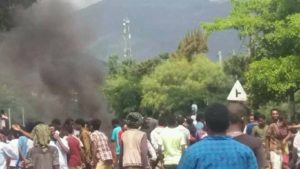 Protests continued for the fifth day in the towns of Alamata, Qobo and Mohny, towns predominantly Amhara but under the administration of the Tigray region.

The residents in these northern towns have been protesting the forceful takeover and redrawing of their boundary by the Tigray region.

On Sunday, security forces of the Tigray region shot and killed five people in Alamata, while dozens others sustained gunshot wounds.

Arrest by Tigray security forces continued today. No exact figures on the arrests are available but residents told ESAT that hundreds of people have been arrested since Sunday.

Residents blocked roads to the regional capital Mekele demanding the release of their compatriots.

Meanwhile, residents of Gondar and Dessie in the Amhara region are calling for a protest demonstration for Sunday to show their solidarity with the people of Raya.