Over 200 detained amid continued deadly protest in Northern Ethiopia 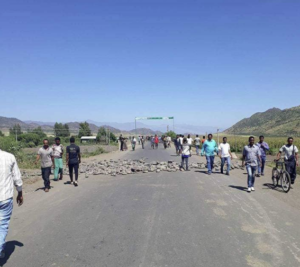 Security forces of the Tigray region detained over 200 people in Raya Waja and Raya Qobo. The whereabouts of most of the detainees is not known, according to residents who spoke to ESAT.

Ninety of the detainees have reportedly been held at the Maichew prison.

On Sunday, Tigray region special police killed five residents of Alamata, a town sitting 470 miles north of the capital Addis Ababa on the route to the regional capital Mekele.

The residents took to the streets on Sunday to once again show their objection of being administered under the Tigray region.

Hospital sources told ESAT on Monday that 35 people have been admitted for gunshot wounds. Thirteen of them have sustained serious wounds, according to hospital sources.

Protests spread to Mehoni, Raya Waja and Raya Qobo today where residents blocked a bus en route from Mekele to the capital Addis Ababa. The residents demand the release of detainees before freeing the bus.

Meanwhile, war of words continued between the Amhara and Tigray regions, one side accusing the other of fomenting the crisis.