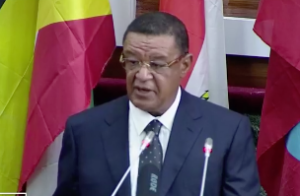 Ethiopia’s President says despite positive changes in the country’s political landscape, rampant lawlessness has threatened the supremacy of the law. Mulatu Teshome said it would be the priority of his the government, at all levels, to ensure that justice prevails as the country makes political and economic reforms.

Dr. Mulatu Teshome was speaking at the opening of a joint session of the House of People’s Representatives and the House of Federation, the upper house.

The President was referring to widespread and deadly ethnic violence and displacement in a number of places in the country which he said have slowed down government’s plan to further progress in social and economic areas.

Hundreds were killed and over two million people have been internally displaced in the last two years of ethnic motivated violence, especially in areas inhabited by the Oromo and Somali communities in Eastern Ethiopia.

A recent attack on minority ethnic groups in close proximity of the capital has left dozens killed and thousands displaced. The capital Addis Ababa was not spared from the violence as police said dozens of others were killed by groups that have affiliations with political parties.

Dr. Teshome said while the government continues to work on reforms and widening the political space, it would also equally work for law and order to prevail over anarchy. Measures will be taken to safeguard the security of citizens and bring violators of the law to justice, according to the President.

Outlining his government’s plan for the budget year, the President said amendments would be made on the notorious Anti-Terrorism Proclamation, the Charities and Societies Proclamation as well as laws regarding media and the right to information.

Thousands had been thrown into jail for allegedly trespassing these draconian laws but Prime Minister Abiy Ahmed, who took political power six months ago, has released thousands of political prisoners and leaders of political movements as well as critical journalists.

The President also said the government would work with opposition political parties to reform electoral laws in a bid to create a democratic and participatory system.

Ethiopia will hold Parliamentary elections in 2020. Almost all opposition groups that were in exile returned home after a call by the Prime Minister; and they are expected to take part in the elections.