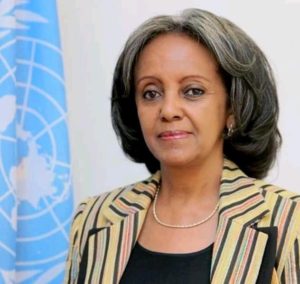 The government of a reformist Prime Minister in Ethiopia, which had appointed half women in its cabinet last week, has elected a female as the country’s president.

Ethiopia’s bicameral parliament today appointed Sahle-Work Zewde, a career diplomat that served her country as an ambassador and later with the United Nations in different capacities.

She told MPs that one of her priorities as president of the country was to be a role model for girls and women, and support Prime Minister Abiy Ahmed’s government reforms, especially in bringing more women to leadership roles.

The sweeping change towards gender parity in government positions is widely admired and considered as a bold move by the government of Abiy Ahmed in the otherwise patriarchal and conservative country.

“In a patriarchal society such as ours, the appointment of a female head of state not only sets the standard for the future but also normalizes women as decision-makers in public life,” tweeted Fitsum Arega, Ahmed’s chief of staff.

The french educated diplomat had served as ambassador of Ethiopia to France, Djibouti and Senegal among others.

Zewde will be Africa’s only female head of state currently holding office.