Ethiopia to release hundreds of youth detained in military camp 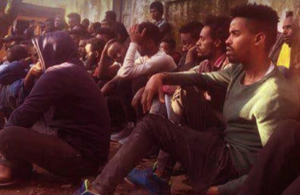 The federal police commissioner said 1,204 youth rounded up in the capital Addis Ababa last month and detained in a military camp would be released on Thursday.

The youth were detained last month as police carried out arrests following ethnic motivated attacks in the outskirts of the city that left dozens dead and thousands displaced from their homes.

A three day social media campaign was launched yesterday with activists calling for the release of the youth whom they said were unjustly detained in Tolay, a military camp notorious for its harsh weather and environment.

Last month, police made hundreds of arrests in bars and public places in the capital. The police were under heavy criticism for carrying out mass arrest that also targets innocent citizens.

The commissioner, Zeinu Jemal told the VOA that the youth were given education on the need for peace and respect for the law. He however said 467 youth from Burayu and Addis Ababa will face criminal charges for direct involvement in the deadly violence.