Ethiopia: Several killed in clashes between OLF and govt forces 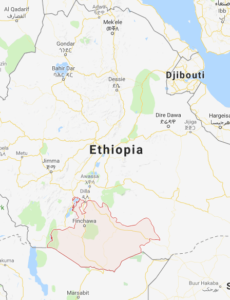 According to ESAT sources, at least five government forces were killed in the fight while about 30 OLF soldiers were injured. It was not immediately clear how many, if any, combatants were killed on the OLF side.

The source said government forces were patrolling the main highway near Gerba town, that was reportedly blocked, when they confronted OLF combatants.

Five of the seven government soldiers injured in the fight had died on arrival at the Bule-Hora Hospital, according to the source, who also said two soldiers were sent to the Dilla University Hospital.

Meanwhile, president of the country’s Oromo region told Deutsche Welle Amharic that the decision by some youth to side with the OLF against a well equipped national army was not a wise decision on their part. Lema Megersa called on the youth to return home to their peaceful lives and adhere to a peaceful form of struggle if they want to assert their political rights.

The Oromo Liberation Front (OLF) is one of the armed opposition fronts that had recently returned to Ethiopia from their base in Eritrea after a call by Prime Minister Abiy Ahmed, who extended an olive branch to all the opposition to come home and take part in a peaceful political process.

Despite a call by the government for all groups to lay down arms, the OLF remains armed, and in fact, it’s combatants have reportedly control some areas in south and western Ethiopia.

According to sources, OLF and the Oromo youth network called the Qeerroo have taken control of West Guji zone.

Ethnic clashes between the Guji (Oromo) and the Gedeo ethnic groups in June and July resulted in the death of over 300 people and the displacement of about 1 million Gedeos from their homes. It is feared that the safety of those who had recently returned to their villages is in great danger, the source said.