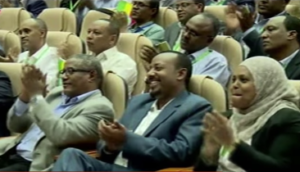 Abiy Ahmed (front, center) reacts to announcement of his re-election

Ethiopia’s ruling party, the Ethiopian People’s Revolutionary Democratic Front (EPRDF), re-elected the incumbent Prime Minister, Dr. Abiy Ahmed as its chairman until the next Congress. The decision by the Congress of the four party coalition will, by default, allow Ahmed to continue in his position as the Prime Minister.

The re-election of Abiy Ahmed as chairman of the Front that was conducted at the end of a three day Congress in the Southern city of Hawassa has also given him the vote of confidence to continue his political and economic reforms he has begun when he assumed the position six months ago.

The 11th Congress of the Front overwhelmingly voted for Ahmed as its chairman. Abiy got 176 of the 177 votes at the Congress, which takes many by surprise considering even the hardliners of the Tigray People’s Liberation Front (TPLF) have given their votes to Ahmed.

Debretsion Gebremichael, representing the TPLF, got only 15 votes in his attempt to be the deputy chairman of the Front.

The coalition that rules the country for 27 years, EPRDF, has been in a roller coaster of changes since February 2018 when Hailemariam Desalegn suddenly submitted his resignation from the Premiership. Hailemariam represented the South Ethiopian People’s Democratic Movement, one of the four parties forming the EPRDF. Seen as the puppet of TPLF, the Front that has dominated the EPRDF until Ahmed and his team of reformists emerge victorious in the coalition’s election six months ago, Desalegn has, for the most part, been toothless and criticized for his unwillingness to use the power at his disposal. Critics even wonder if he had wielded any real power.

Abiy and a group of reformists, now dubbed “team Lemma” a name dedicate for Lemma Megersa, a leading figure in the ODP, believed to be a strong proponent for change in the country, have changed the political dynamics for the better. Lemma Megersa is the President of the country’s Oromo region.

“Team Lemma” is not just Ahmed’s group within the ODP, but also has reformists from the Amharas, in the likes of Mekonnen, chairman of the ADP and the deputy Prime Minister.

In a resolution issued at the end of the the 11th Congress in Hawassa, the participants vowed to continue with political and economic reforms introduced by Ahmed. The resolution says they would strive to widen the political space for the strengthening of a multi party system.

Almost all of Ethiopia’s opposition political groups in exile have returned home following a call by Abiy Ahmed, who publicly said his ultimate mission was to hold free, fair and democratic elections.

With the next elections slated for May 2020, Ethiopians will once again go to the polls hoping, this time around, no power will mess with their votes. Past elections were rigged as opposition political parties were ostracized by none other than the TPLF, an oligarchy that has ruled the country with brute force for 27 years. Many hope “Team Lemma” has brought an end to TPLF domination.

The demand by the opposition and the promise made by Abiy’s government was to establish institutions necessary for a democratic society: an independent electoral body and a justice system that serves all and treats all equally, among others.

Now that Dr. Ahmed is well situated in his position, he would be tested in putting in place these institutions of democracy; and finally put his money where his mouth is.