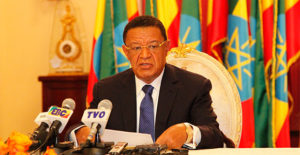 Ethiopia will on Thursday appoint a new president to replace Mulatu Teshome, who will be resigning a year ahead of his first term limit.

Parliament appoints presidents every six years, which is mostly a ceremonial position with no executive power. It has a two-term limit.

Teshome took over from Girma Woldegiorgis, who served two-terms.

Dr. Negasso Gidada, the first president since the formation of the Federal Democratic Republic of Ethiopia in a 1995 new constitution, served one term and resigned from the ruling party after a split and infighting with in the TPLF led government. He later became an independent member of parliament.

Gidada was stripped off perks that come with a former president. He later detailed in his book the interference and pressure from the government of Meles Zenawi. He wrote that he was not able to carry out even the little tasks of the ceremonial president due to interference by Zenawi’s TPLF that controlled the executive branch.