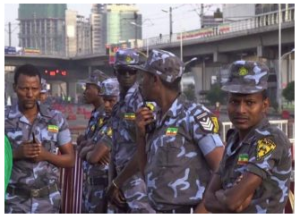 A petty spat turned deadly as the drunken police officer opened fire and killed two federal police officers. A team of other officers who arrived at the scene exchanged fire with officer killing him, police commanders told local media.

The shootout resulted in injuries to five officiers.

The officers were guards for the apartment complex that serves as residence for members of Ethiopia’s parliament.

Police commissioner Zeynu Jemal confirmed to local media that the officer was drunk; while area police commander, Berhane Bihone says a simple disagreement, aggravated by alcohol, led to the shootout.

No other motives were given for the officers action.