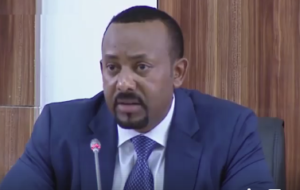 Ethiopian Prime Minister Abiy Ahmed said few among the soldiers who came to his palace last week to demand pay raises had actually came to kill him.

The Prime Minister told the Parliament today that the aim of those who organized last week’s march to his office by some 240 special commandos was to “abort” the political reform process. But he said he had to defuse the situation by giving soldiers the opportunity to get things off their chest. He said the pushups he did with the soldiers was one way to ease the tension.

Ahmed said he has learnt that the ringleaders of that protests were disappointed that they did not kill him.

The special commandos, who were in Addis Ababa to quell deadly violence last month, had insisted on entering the National Palace while they were fully armed leading to an unusual commotion in the area. The Internet was cut off in the area for few hours. The soldiers finally agreed to leave their arms behind before entering the palace grounds.

He said most among the soldiers have repented their mistakes and had actually exposed the leaders of the unconstitutional act.

Chief of Staff of the Ethiopian defense forces said on Monday that the special commandos that showed up at the National Palace last week and demand to speak to the Prime Minister have violated the country’s constitution and the military discipline that they were highly expected to strictly adhere to.

The Chief of Staff Seare Mekonnen said the leaders of the illegal action were arrested while a thorough investigation was underway to determine the motives behind what he described as anarchy by some members of the special commandos.

He said the 240 commandos that showed up at the National Palace were fully armed with snipers and other weapons.

Abiy Ahmed said if he had not brought the situation under control, things would have turned really ugly for the country. He added that the fact that he is also an army colonel helped him to deal with the soldiers.

“Things would have really turned ugly if we were to take actions against the soldiers,” he said.

“Although I looked okay and jovial on that day, deep down inside, I was really furious by the actions of the soldiers,” he told the Parliamentarians.

The Chief of Staff, who said on Monday that the action by the commandos unconstitutional, vowed that those who organized the unlawful march to the Palace would be prosecuted to the fullest extent of the law.