Ethiopia: Abiy Ahmed pushes for federalism, EPRDF congress will not deliberate on ideology 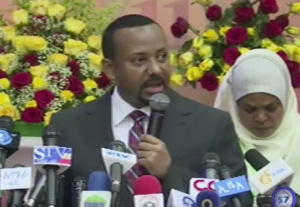 As a historic congress of Ethiopia’s ruling coalition, the Ethiopian People’s Revolutionary Democratic Front (EPRDF) kicks of today in the Southern city of Hawassa, Prime Minister Abiy Ahmed, who is also the coalition’s chairman said federalism was the way to go for Ethiopia considering historical and current realities in the country.

Dr. Ahmed however warn that federalism should not be mixed and confused with ethnic identity.

“If we are able to form regional administrations without confusing it with ethnic identities, then there is no question that federalism is the best option for Ethiopia’s situation,” Dr. Ahmed told the 11th Congress of the ruling coalition, the first Congress since he took the Premiership in April. He said regional governments should treat all people equally regardless of their ethnicity.

“Let us not attack one another motivated by and based on our ethnic and religious differences,” he told the Congress by way of addressing escalating deadly ethnic attacks in various corners of the country.

The 11th Congress is also the first in participating representatives of opposition political parties, most of which were in exile until recently.

Spokesperson of the Congress, Fekadu Tesema, meanwhile told reporters that the EPRDF will not deliberate on its ideology and change of its emblem at this Congress.

Revolutionary Democracy has been the governing ideology for the four party coalition that is in power for 27 years; but critics and the opposition say the ideology is neither revolutionarty nor democratic.

The EPRDF has been under the ironfist control of the Tigray People’s Liberation Front (TPLF) until this past spring when a group of young leaders from the Oromo Democratic Party (ODP) and the Amhara Democratic Party (ADP) came out victorious after an apparent internal struggle within the coalition. The ADP and ODP were newly named, dropping their names that was in use since their inception and birth under the midwife of the TPLF. Their old names were made to rhyme with the EPRDF and reflect the ideology the Front pursues. At their separate congress before the EPRDF Congress, the ADP and ODP have also passed resolutions that challenge the status quo. They have also changed their emblems.

Political analysts say the EPRDF is no more, considering the resolutions passed by the ADP and the ODP, as well as the political reform measures taken by the young Prime Minister, which they say go contrary to the Fron’t ideology and its by laws. The fourth member of the coalition representing the Southern region of the country, the South Ethiopian People’s Democratic Movement (SEPDM), has meanwhile remained an inconsequential member of the four party Front.

Anbiy Ahmed meanwhile said that the ongoing Congress was historic in that it would decide the path the country would follow. He however did not elaborate on the decisions expected from the Congress.

Ahmed said he has great hopes for the country which he said is on a path for change.

Prime Minister Abiy Ahmed takes the lion’s share of credit for taking a number of political and economic measures in the last six months in office. He vowed to hold a free, fair and democratic election due to be held in two years. He called on opposition politicians in exile to join him in changing the country.

He turned regional foes into friends and mend fences with all parties hitherto considered opposition, whom he likes to refer as “competitors.”

He is expected to be re elected chairman of the Front by the ongoing three day Congress, which by default enables him to remain Prime Minister until Ethiopia’s next general election.