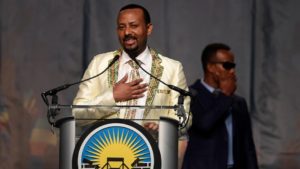 Dr. Ahmed will first travel to Paris on Monday to meet with French President Emmanuel Macron. In July, Macron extended an invitation to Ahmed to visit his country.

He will then head to Germany, where he will attend the G20 Compact with Africa (CwA) conference in Berlin.

The G20 Compact with Africa was initiated under the German G20 Presidency to promote private investment in Africa, including in infrastructure. It brings together reform-minded African countries, according to the CwA website.

While in Germany, Abiy Ahmed will held talks with chancellor Angela Merkel on trade, economic and social issues and issues of bilateral interest, according to the Ethiopian consulate in Frankfurt.

On Wednesday, the Prime Minister is expected to address about 20,000 Ethiopians at an event in Frankfurt, who will come from all over Europe.

Abiy Ahmed’s first visit to the United States at the end of July drew the gathering of tens of thousands of Ethiopians in DC, Los Angeles and Minneapolis, who came out to support his political reforms back home.