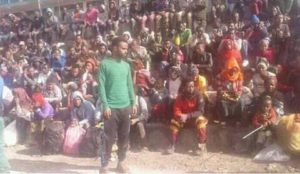 Partial view of the displaced sheltered in a school

The last three days have seen bloody and deadly attacks in the outskirts of Ethiopia’s capital Addis Ababa in what residents and social media activists described were ethnic motivated, with an Oromo youth group known as Qeerroo brutally attacking other groups.

ESAT received several gruesome photos of bodies of people covered with blood, not appropriate to share in this post. Messages sent to ESAT also described details of the attacks allegedly perpetrated by the group calling itself Qeerroo, a network of youth led by and taking cues from diaspora Oromo ethno nationalists.

The killings took place as the Qeerroos return home on Saturday to their districts outside the capital after taking part at a welcoming rally in Addis Ababa’s central Meskel Square for leaders of the Oromo Liberation Front (OLF), a group that was in exile for most of its existence.

Deputy Mayor of the capital, Takele Uma, who is an Oromo, said the killings took place as the rally goers return home but denied any links to the Qeerroos. He said several people have sustained injuries and others displaced.

The attacks took place in Burayu, Ashewa Meda, Asko, Anfu and Keta areas in the outskirts of the capital which are administratively with in the Oromo region.

A number of people report seeing several bodies taken into the Paulos Hospital in Addis Ababa.

Reports and photos reaching ESAT show hundreds of people are sheltered in schools and churches to save their lives. Those who escaped from the attacks and spoke to the Ethiopian Television said their houses were set ablaze by the attackers. A man said his life was spared because of a neighbor who spoke the attackers’ language.

Survivors of the attack and some residents of the capital held a flash demonstration at the headquarters of the Ethiopian Television to make their voice heard.

A woman said police were overpowered by the attackers and they could not stop the mayhem.

Asked why the police failed to stop the attacks, police commissioner for the Oromo region, Alemayehu Ejigu told etv that the topography of the areas and inaccessible roads made the work of the police difficult. But a woman who spoke to etv said she actually saw some police officers running away from the attackers.

The commissioner, who denied the attacks were ethnic motivated, could not say how many people were killed in the attack. He however said 70 people have been arrested so far in connection with the attack.