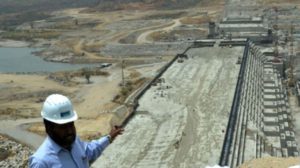 Seven years after the launch of what would be Africa’s largest hydroelectric dam, the contractor, Metal and Engineering Corporation (METEC), has received millions of dollars in payments without completing any of its electro mechanical projects.

An investigative report by Walta Information Center revealed that METEC has completed only 30% of the electro mechanical projects at the site of the dam dubbed Ethiopia’s Renaissance Dam but has received over 65% of the total payments.

METEC, that has been run by TPLF army generals until recently, signed a 963 million dollar contract with the government when the project began in 2011. It has so far received 630 million dollars. METEC received payments for the 35% of electro mechanical work that it has not performed.

The embezzlement at the site was further exposed when the civil contractor for the dam, Salini Impregilo, demanded compensation for the cost it had incurred due to delays in the electro mechanical works by METEC. Salini Impregilo has reportedly demanded 338 million Euros and an additional 119 million dollars.

“METEC experience was not hydropower experience. That is the truth. They are doing civil engineering with military engineering experience,” says the consultant, Roberto Manigini. “The problem is that they put so many things together,” he added.

Early generation must have been started two years ago, officials at Ethiopian Electric Power and engineers at the site said but seven years after the project began, METEC has not completed a single key project at the site of the dam.

Speaking at a press conference a week ago, Prime Minister Abiy Ahmed has said METEC has failed to deliver and the rest of the project would be given to other contractors.

According to the investigative report, several projects have already been awarded to international contractors and the role METEC would be limited to providing locally made steel and other inputs for the mega project.