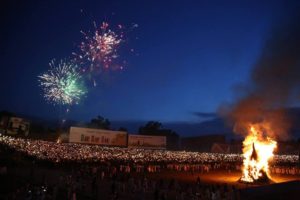 Ahead of the celebration of Meskel, the founding of The True Cross tomorrow, followers of the Ethiopian and Eritrean orthodox churches lit bonfires at dusk today.

But the bonfire, the Demera as it is called, is more of a national festival, not just limited to followers of the church.

In Ethiopia’s capital Addis Ababa, tens of thousands of people gathered at the central square, Meskel Square, named after the holiday. A giant Demera was lit by the patriarchs of the church and government dignitaries, as the choir sang religious hymn.

Patriarch of the Ethiopian Orthodox Church, Abuna Mathias said on the occasion that the teachings of The Cross was one of love, forgiveness and unity. His holiness said the message on The Cross was to forgive even when one was the victim.

Mayor of the capital, Takele Uma, on his part said the rest world admires the festival, which he said was proof that country has deep religious, traditional and cultural values that the world appreciates.

When the bonfire finally collapses, it is believed to bring good luck to the people living in the direction the pile falls.

The laity then use the charcoal and ash to make a cross mark on their forehead as a sign that their sins have been dismissed.