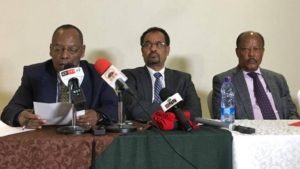 A statement today by Oromo political fronts labeling other groups as enemies of the people of Oromo and claiming exclusive rights to places like Ethiopia’s capital Addis Ababa was reckless and destructive to Prime Minister Abiy Ahmed’s all inclusive political reform process, says a researcher and writer on Ethiopian politics.

“The statement by the group of Oromo political parties today in Addis Ababa goes against the cultural values of the people of Oromo, which welcome and embrace others regardless of their ethnic origin. It goes against the core cultural attributes of the Oromo,” says Geletaw Zeleke, Secretary for the Ethiopian Research and Policy Institute with the Ethiopian Dialogue Forum.

The statement was given by five Oromo parties and fronts namely the Oromo Liberation Front (OLF), the Oromo Federalist Congress (OFC), the United Oromo Liberation Front, Oromo Liberation Unity Front and the Oromo Democratic Front (ODF). All, with the exception of the OFC, have just returned to Ethiopia from exile following a call by Prime Minister Abiy Ahmed to all opposition parties to come home and take part in peaceful political process, a call he made as part of his all inclusive political reform efforts.

The statement accused that Oromos and properties that belonged to the Oromos were targeted in the recent violence in the capital Addis Ababa.

“But these groups in their statement did not mention or feel remorse for the death of dozens of people in recent ethnic motivated attacks in Addis Ababa and its environs,” Zeleke said and added “the statement was irresponsible as it could possibly incites further violence.”

Several reports show dozens were killed in the days before and after the welcoming rally in Addis Ababa on September 15, 2018 for the return of the OLF and its soldiers from their base in Eritrea. In Burayu alone, 12 miles outside the capital, 23 people, mainly belonging to the Dorze minority ethnic groups, were killed in cold blood. The capital’s police commissioner said yesterday that additional 28 people were killed in a number of other districts in the capital following the rally to welcome the OLF.

The victims told several media outlets that the perpetrators, who claimed to be Oromos, were threatening them to leave the area saying the land belongs only to the Oromos. The perpetrators used stones, knives and sticks for their killing spree, according to the residents of Burayu. About 15,000 residents of the town, mainly the Dorzes have been displaced from their homes and sheltered in schools. Authorities said most have returned home.

The statement by the Oromo groups failed to mention the plight of these citizens and engage in attacking other political groups as well as the media, including the Ethiopian Satellite Radio and Television (ESAT.)

Critics say the statement by the group was all the more insincere as some of the leaders of these Oromo groups have actually used ESAT and similar independent media to push their political agenda while in exile.

“ESAT has been the voice and platform for the Oromo people, including politicians like Bekele Gerba, who issued today’s statement . No other media has covered the Oromo protest movement like ESAT,” said Mr. Zeleke.

Zeleke, meanwhile, said the ethnic federal arrangement that the groups vowed to defend did not actually benefit the Oromo people. “While federalism is open for discussion and debate in tomorrow’s Ethiopia, the statement by the group that says the federal arrangement was the only way to go and that they would defend it as a life and death issue to the Oromo people was totally thoughtless.”

The statement by the groups that says Ethiopia’s capital Addis Ababa, which they call ‘Finfinne,’ belong only to the Oromos, was an outrageous claim, Zeleke said adding, “even the name ‘Finfinne’ was unconstitutional as the law of the land recognizes the capital of Ethiopia as Addis Ababa.”

“The Oromos are known to respectfully attract others to their culture and embrace people from other ethnic groups. ‘Mitecha’ and ‘Mogasa’ are values that embrace others. The Oromos have even introduced ‘Gudifecha’ (adoption) to the rest of the world. The Oromos don’t exclude others and the statement by the group go against theses core values of the Oromo people.”

The New York Times reported in its yesterday’s issue, quoting experts that the return of ethnic groups like OLF was not a good idea for Ethiopia’s political reforms spearheaded by Prime Minister Abiy Ahmed. It suffocates the political space, exacerbates ethnic tensions and violence, the report said. (EW)