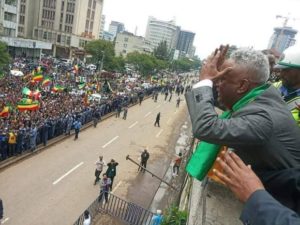 Mr. Beyene has been a vocal critic of the ethnic oriented and divisive rule by the Tigray People’s Liberation Front (TPLF), an ethnic oligarchy that controlled political power with an iron fist for over a quarter century.

He was forced into exile 22 years ago, few years after the TPLF took control of political power and began persecution of political dissidents and activists.

When a young breed of leaders from the ruling coalition, EPRDF, led by a reformist Prime Minister, Abiy Ahmed, took the helm of political power in April, they made a call to the opposition and critics abroad to return home and work together.

Mr. Beyene’s return to his country could be taken as a major step towards an end to a long culture of isolating and persecuting critics by the government.

“Imprisonment, killings and exile because of one’s political stance need to stop,” Tamagne Beyene said in an event organized in Addis Ababa to welcome him.

“The political change in Ethiopia had come at a great cost,” Beyene said “so many had paid with their lives, thousands have been jailed and tortured.”

The former comedian urged that the changes happening in Ethiopia should be augmented by forming institutions that he said were vital for the creation and development of a democratic culture.

“There is no bad ethnic group in Ethiopia. But there are definitely bad individuals everywhere. There are bad people in the government. There are thieves and scoundrels holding public offices. We need to do away with them,” he spoke to a roaring crowd at the Millenium Hall in the capital Addis Ababa.

Mr. Beyene urged authorities to ban political parties whose political platform is based on targeting and hating certain ethnic groups.

The activist will travel to major cities and towns across the country. He said he will do his part to urge people to support ongoing political reforms.

Tamagne Beyene is also known for his hard hitting documentaries and exposés on ESAT.