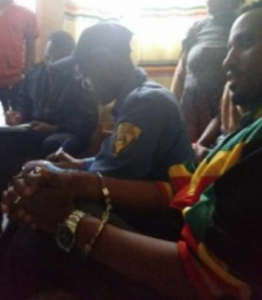 Police announced new figures in death toll in deadly violence in Addis Ababa as they carried out mass arrests over the weekend. Police said the arrests were made to fight growing crimes and lawlessness in the capital but the presence of supporters and members of opposition parties among the detainees and the alleged criminals have led some to believe a return to old tactics by the government.

Degefe Bedi, the city’s police commissioner told reporters that the first round of killings took place during the rally held to welcome leaders of the Oromo Liberation Front (OLF). He said fights over which flags to be hoisted led residents of the capital on one side; and the Oromo youth that were in the city to welcome the OLF on the other, to engage in violent attacks.

Residents of Burayu told several media outlets in the capital that they were attacked by groups of young men claiming to be Oromos. The people of Burayu have reported rape, beatings and killings against mainly the Dorze ethnic groups. Over 13,000 people of Burayu were displaced and sheltered in schools until yesterday when the city government announced that close to 12,000 people have been returned to their homes and 17 of the 20 temporary shelters have been closed.

The commissioner said that in the days following the Burayu killings, demonstrations in the capital called to denounce what happened in Burayu turned anarchic and deadly and resulted in the loss of 28 lives. Most were stoned to death or beaten with sticks. Of the 28, seven were killed by security forces, Bedi said, but did not give details.

He however said one security officer is detained for unlawfully killing a protester.

Police have been conducting mass arrests in the capital in the aftermath of the deadly violence. But activists and opposition political parties say their members and supporters have been targeted in the name of arresting hooligans and thieves.

The commissioner, Degefe Bedi, said police have arrested close to 1,500 people in the last few days in what he said was to fight organized crime against peaceful residents of the capital. Police raided bars, restaurants as well as hookah and gambling houses in the capital. The arrests mainly targeted the youth. But supporters and members of opposition political parties, mainly that of Patriotic Ginbot 7, have been arrested leading to suspicion by many who took to the social media saying the city’s security was targeting political opponents.

Last week, police have arrested Berhanu Tekleyared and Mekonnen Asmamaw, two individuals known for publicly supporting PG7 as well as several other members of the party.

A leading member of PG7, Neamin Zeleke says his party is in talks with authorities regarding the arrest of the two and other members of the party. Mr. Zeleke said members and supporters of other opposition parties have also been arrested.

Neamin Zeleke said in his Facebook post that some elements who are unhappy with the ongoing political reforms in the country were trying to use the unfortunate violence in the capital to fan further crisis in an attempt to reverse the political progress and stop the march towards democratization in the country.

The police commissioner meanwhile said about 1,200 of those arrested were sent to the Tolay detention center and would be released after what he called “education and rehabilitation.” But some 174 of them who were involved in serious crimes would face justice.

Critics say the mass arrest carried out in the capital and other towns without due process of the law has casted a shadow over the otherwise favorable view of the public towards the government of Abiy Ahmed.

Many, on their social media postings, were calling for the Premier to address the mass arrests.