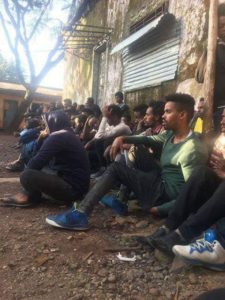 The Human Rights Council says the mass arrest carried out by police in Addis Ababa last week was unlawful.

The Council said it was troubling that over 1,200 people were detained at a military camp without charges, while they should have been arraigned before the court in 24 hours of the arrest or set free.

The council said in a report that police had beaten the detainees while rounding them up from restaurants, bars and other public places while they have committed no crimes.

The Council has called for the unconditional release of the detainees.

Police in Addis Ababa arrested close to 1,500 people a week ago in what they said was to fight organized crime. Police raided bars, restaurants as well as hookah and gambling houses in the capital. The arrests mainly targeted the youth.

Supporters and members of opposition political parties, mainly that of Patriotic Ginbot 7, have been arrested leading to suspicion the city’s police and security were targeting political opponents.

Twenty eight people have been killed in deadly ethnic violence in several districts in Addis Ababa, according to the capital’s police commissioner. Those tolls were in addition to the 27 people killed in ethnic attack in Burayu, in the outskirts of the capital. Residents displaced after the attack told reporters that the Oromos had attacked the Dorzes and other ethnic group from Southern Ethiopia.