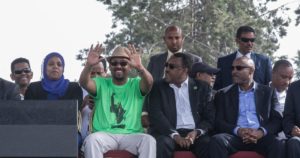 Ethiopian federal prosecutors today charged five individuals with planning, coordinating and executing an assassination attempt on the life of Prime Minister Abiy Ahmed at a rally on June 23, organized to show support for the reformist Premier.

Getu Girma, Birhanu Jafar, Tilahun Getachew, Bahiru Tolosa and Dessalegn Tesfaye were charged with terrorism, attempting to kill the Prime Minister. The charges allege that the defendants carried out the attempted murder on the PM with a belief that Abiy Ahmed was not popular among the Oromos and did not stand for the rights of the Oromo people. The charge says the defendants, who are linked to the Oromo Liberation Front (OLF), carried out the attempted murder with a conviction that the OLF was the rightful representative of the Oromo people, but not the Prime Minister. And that the OLF should replace the government of Abiy Ahmed.

The charge alleges that one of the masterminds of the attack was a woman by the name Genet Tamiru with an alias Toleshi Tamiru, who is based in Kenya.

It was not immediately clear if the Ethiopian government requested the extradition of the woman.

The charges allege that the masterminds of the attack have agreed that the mission should be carried out by “operatives of the OLF who were capable of carrying out a bomb attack.”

One of the alleged coordinators of the attack, Tesfaye Urge, whom prosecutors presented as the lead mastermind of the attempted assassination in earlier court proceedings, was not mentioned in the charge filed at today’s court. Tesfaye Urge was ironically the anti-terrorism head with the Ethiopian National Intelligence and Security Service (NISS), the country’s spy agency.

Police earlier alleged that Tesfaye Urge had coordinated the attempted assassination on the PM in collusion with higher ups who were still at large.

Legal analysts say Tesfaye Urge might have been cooperating with authorities who want to get to the bottom of the operation and catch the big fish. Establishing the link between Urge and Genet Tamiru a.k.a Toleshi Tamiru, one of the alleged masterminds based in Kenya, would help in charging other key players of the assassination attempt, according to legal experts.