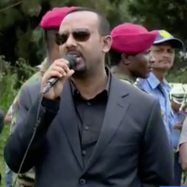 Prime Minister Abiy Ahmed, who visited residents displaced by the weekend deadly violence outside Addis Ababa pledged to bring perpetrators of the killings to justice.

The Premier went to the Medhanialem School today where hundreds of people took shelter fleeing their homes in Burayu, where a group carried out a deadly attack targeting certain ethnic groups. The Prime Minister did not mention any culprits by name but vowed to use the law to punish them.

Police commissioner, Zeinu Jemal yesterday said at least 25 people were killed on Saturday and Sunday when a group that he said have claimed to represent two political parties unleashed an attack in the outskirts of the capital.

Dr. Ahmed said the ultimate aim of the attackers was to disintegrate Ethiopia. “That would never be materialize, it is a futile exercise,” he told the displaced.

He warned those whom he said claim to be activists and competing parties to refrain from any form of violence.

The Prime Minister, who is credited for his political reform measures in the East African nation, said some destructive elements wish to take the country backwards to the days of government repression and anarchy, but vowed his government is determined to punish these elements.

The federal police commissioner said at least 25 people were killed Saturday and Sunday in Burayu, 12 miles northwest of the capital Addis Ababa in an attack targeting ethnic groups, while police killed five people in the capital Addis Ababa in a demonstration called to denounce the weekend killings. The police commissioner said police had to use deadly force in Addis Ababa after a demonstrator snatched a weapon from a police officer.

The killings in Burayu and other localities in the outskirts of the capital Addis Ababa took place following Saturday’s welcoming rally in Addis Ababa’s central Meskel Square for leaders of the Oromo Liberation Front (OLF), an Oromo armed group that was based in exile in Eritrea.

400 people in Burayu and 300 in Addis Ababa have been arrested in connection with the violence, according to police.

Thousands of residents of Burayu and other areas who flee the attack have been sheltered in schools and churches, reports indicate.