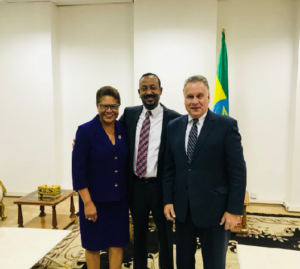 A delegation from U.S. Congress visiting Ethiopia has said political and economic reform measures taken by Prime MInister Abiy Ahmed in a short span of time were very encouraging.

Congressman Chris Smith is in Ethiopia leading a delegation from the U.S. Congress to see the progress made in the country especially after a reformist Prime Minister took office in April this year. That same month, Congress had passed a resolution (H. Res. 128) to support respect for human rights and encouraging inclusive governance in Ethiopia. The resolution, introduced by Smith himself in February 2017, came after two years of deadly government crackdown on citizens demanding political changes and better economic opportunities.

Mr. Smith, who met Dr. Ahmed and other government officials as well as representatives of civic, political and religious groups in Addis Ababa, has said the fact that the new Prime Minister considers political opponents as partners in the process of building a better Ethiopia was highly commendable.

“Ethiopians deserve a world class government. I think they have it. Our hope is that it will be sustained,” the New Jersey Congressman told a gaggle of reporters in Ethiopia’s capital.

Congresswoman Karen Bass, who is also in the U.S. delegation reiterated reform measures taken by the Prime Minister were very encouraging. She said the delegation would present recommendations to the U.S. government on how to better help Ethiopia to further the changes and progress achieved so far.
Smith, who said said he has been closely following political changes unfolding in the country, has also underscored that his meeting with the Prime Minister was very fruitful.

Meanwhile, Smith says the United states would provide military training to Ethiopia’s defense forces both in the country and abroad. The Congressman who met and held discussions with Chief of Staff Seare Mekonnen said the United States recognizes the role played by Ethiopia in maintaining peace and security in the region.