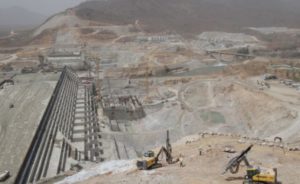 Workers at Ethiopia’s renaissance mega electric dam continued their strike for the fifth day demanding pay increases and an end to workplace abuses.

Construction at the dam, also known as the Grand Ethiopian Renaissance Dam, has been going on for eight years despite initial plans to complete the project in five years.

The dam has always been controversial both at home and with riparian states like Egypt that fear the project will cut into their water share of the Nile.

Contracts to the project has been monopolized by EFFORT and METEC, party conglomerates run by the Tigray People’s Liberation Front (TPLF), an ethnic party in power in Ethiopia until recently. Accusations are mounting against the two companies relating to embezzlement and monopoly of supplies to the national project by a party that also controlled political power.

The dam’s project manager for eight years, Simegnew Bekele, was killed in suspicious circumstances in the capital Addis Ababa. He was found dead in his car from gunshot wounds. Results of investigations are not still made public.

Thousands of workers at the project site were let go recently and the remaining few have gone on strike over abuse by employees and meager salaries that do not commensurate with the volume of work and living expenses.

According to information reaching ESAT, the workers, who have gone on strike since Saturday, also say the provision of food to workers at the site leaves a lot to be desired.