Scores killed in Jijiga, Dire Dawa in an attack by Liyou Police and armed youth 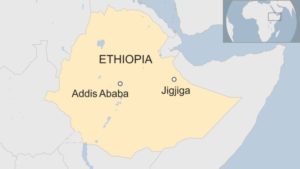 [UPDATE: As we compile this report, the national defense forces and federal police have been given orders to restore calm and protect the public in the Somali region of Ethiopia, as per a statement by the Office of Government Communication Affairs. The Office said the order has been give based on the request by the regional government.]

Non-ethnic Somalis were targeted in an attack by the Somali region Liyou (Special) Police and an armed youth group known as “Hego,” both allied to the regional President Abdi Mohamoud Omar also known as Abdi Illey.

Abdi Illey has been at the centre of the crisis in Ethiopia’s Eastern Somali region, where he maintained power with brute force for the last ten years. Pressure has been mounting over the past few months for him to step aside. Several reports revealed the federal government has been coercing Illey over the weekend to step down which led to his Special police unit and the Hego to target non Somali residents in Jijiga killing about 30.

According to a statement by the city’s Police Commission, ten people, including four children, were killed yesterday in Dire Dawa. Some suspects were arrested and would be brought to justice, the statement said.

A witness speaking to ESAT on the phone from Jijiga said four people were killed today by the Liyou police and the Hego. Speaking from a church he was hiding, the witness said they could not take the injured to the hospital as the armed forces were present in every village. But he said they had gotten cooperation from some ethnic Somalis to rush the seriously injured to a hospital.

“We have lost hope,” he said and added “We have video evidence to show the brutality, but the Internet has been shutdown.”

Several churches have been targeted and some burnt down while banks and government offices looted, according to the witness.

The witness told ESAT that they were sheltered at the St. Michael Church, which was also surrounded by the forces.

A flash demonstration was held at the headquarters of the Ethiopian Television in the capital Addis Ababa where residents of Jijiga and Addis Ababa said government owned media have ignored the crisis in Eastern Ethiopia. The demonstrators also demanded for the federal government to stop the bloodshed in that region.

Meanwhile, the government’s Human Right Commission said its branch office in Jijiga has been attacked. The Commission in a statement said computers and documents were looted and called on the government to intervene to stop the lawlessness.