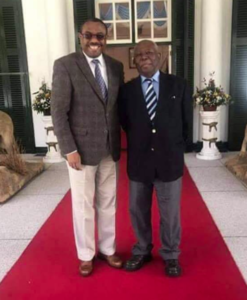 A photo of former Ethiopian communist leader, Mengistu Hailemariam and Hailemariam Desalegn, a former Prime Minister, that surfaced on the social media on Wednesday as they met in Zimbabwe’s capital Harare has opened old wounds. Some insist Mengistu should face justice while others argued for his pardon.

Mengistu’s last name and Desalegn’s first name are just a coincidence; and there is no chance that they could be related. But their photo stunned many Ethiopians who had never seen a glimpse of the former leader who toppled the monarchy in a bloody revolution in 1974. There was indeed another photo purported to be of Mengistu that was shared on social media just a little over a year ago. That photo has more resemblance to Wednesday’s and people on the social media were surprised how much the former iron fist ruler has changed; some even made jokes about his short height.

Hailemariam Desalegn, who abruptly resigned this year paving the way for the new reformist Prime Minister Abiy Ahmed, was in Zimbabwe leading an election observer team to monitor elections in Mugabe’s country. They apparently met at the presidential palace and their meeting was described by a regional expert as “cordial.”

“Bilateral meeting with former President Colonel Mengestu and HE former PM Hailemariam D. at The Presidential Palace. The discussion was cordial!” tweeted Tigist Yeshiwas E., Horn of Africa expert who also appeared in a group photo.

Mengistu’s “Red Terror” campaign that had targeted his opponents, mostly a revolutionary youth movement, has claimed the lives of thousands in the 70s Ethiopia. Wednesday’s photo has opened a new debate whether the former leader deserve a pardon by the new government in Addis Ababa. Abiy Ahmed said on the day of his inauguration that all former leaders of the country have “both good and bad history.”

“I have to be born again as Abiy Ahmed to forgive Mengistu,” said an exiled journalist in his Facebook post. “We are not going to benefit anything by bringing Mengistu home, except provoking people for vengeance,” wrote Fasil Yenealem, Editor at ESAT. Yenealem said the photo brought back bad memories as a child visiting prison after prison with his mother to see his dad, who was locked up by Mengistu’s regime. “I agree with most of what Abiy Ahmed does but without Mengistu apologizing for his crimes he should not be part of the ongoing reform by the new Prime Minister,” Yenealem added.

Mengistu, who fled to Zimbabwe in 1991, was found guilty of “genocide,” the killing and imprisonment of thousands of Ethiopians as well as appropriation of properties. He was sentenced in absentia to life in prison in January 2007.

Many saw the photo op as sign by the new government in Addis Ababa that all and sundry would be included and be part of the new Ethiopia. But people like Yenealem would respectfully disagree.

At a number of rallies in Ethiopia in support of Abiy Ahmed few weeks ago some demonstrators carried photos of Mengistu thanking him for what he did as a leader and calling for his return.

“Mengistu is a man with much blood on his hands,” tweeted Martin Plaut, a Horn of Africa expert and a staunch critic of the former president.

“Aren’t we celebrating the 44th anniversary of our revolution in September?” Tigist Mengistu, the daughter of Mengistu Hailemariam meanwhile asked her Facebook followers.