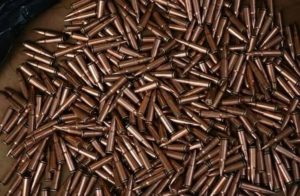 Police in the restive Benishangul Gumuz regional state in Western Ethiopia say they have intercepted about 500 ammos for kalashnikov rifles in a public bus travelling from Goba to Asossa.

Inspector with the regional police told reporters that the ammunitions were stashed in two bags. Mohammed Ahmed said police acted swiftly following a tip from the public and the suspect is apprehended. He also said 37 illegal weapons were caught in the last three months.

Fourteen people were killed and about 70 others were wounded last month in ethnic motivated attack in the region. The regional council announced today that 108 people, including police officers, who allegedly instigated or took part in the communal violence have been arrested. Twenty of those arrested were police officers. Over fifty officials were also arrested last month in connection with the violence.

There has been an increase in the illegal movement of weapons and various mmunitions over the past few month with authorities making several arrests.

Last month authorities in North Shewa have seized several guns while being transported from the capital Addis Ababa to Northern Ethiopia.

Fifty-three Russian made Makarov pistols guns were found hidden in Isuzu truck after a tip-off from the community led to a search.