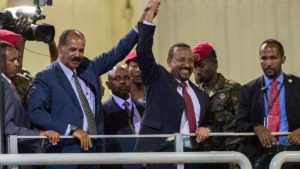 Eritrean leader Isaias Afwerki will visit Ethiopia for the second time after the two Horn of Africa nations in July ended a two decade state of war.

No dates were set for the visit yet.

Representatives of the Amhara regional government were in Asmara yesterday to mend fences with the Amhara Democratic Forces Movement, (ADFM), an opposition group based in Eritrea.

“Representatives of the Amhara Region and the Amhara Democratic Forces Movement, (ADFM), signed a Reconciliation Agreement in Asmara today. The Agreement provides for the ADFM to pursue its political activities in Ethiopia through peaceful means,” said Eritrean Minister of Information in a tweet yesterday.

A number of Ethiopian opposition groups based in Eritrea returned home to take part in the political process, laying down their arms. This was seen as a very positive development for the two countries and it came as part of the agreement between the leaders of the two countries who vowed to end the state of war and begin a new chapter of peaceful relations.

Last month Ethiopian Prime Minister, Abiy Ahmed made a historic visit to Asmara, which was reciprocated the next week by Isaias Afwerki. The visits came after two decades of animosities that were changed when Ahmed made peace overtures, which were welcomed by Afwerki.