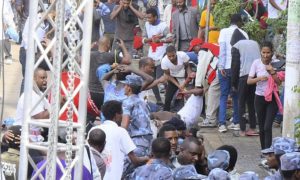 Police investigating the June 23 foiled assassination attempt on the life Ethiopia’s Prime Minister Abiy Ahmed said bombs and other weapons were found at the residence of the main suspect whom they allege has organized and led the plot to kill the Premier.

Tesfaye Urgie, who was ironically the head of the anti-terrorism task force with the Ethiopian National Intelligence and Security Service, has been the prime suspect in the plot to kill Dr. Ahmed.

Police told a court of first instance in Addis Ababa today that they needed additional time to further investigate Urgie’s role in a number of recent deadly violences in various parts of the country. Police also accused that Urgie had committed the crime in collusion with his higher ups and additional time was needed to investigate his collaborators.

An arrest warrant has been issued on Urgie’s former boss, ex-spy chief Getachew Assefa, who led the intelligence bureau since 2001. Getachew and the intelligence apparatchik that was run by the TPLF have been responsible for the imprisonment, torture and extrajudicial killing of dissidents, supporters and leaders of opposition political groups as well as critical journalists.

The court gave police additional 14 days saying the case has all the signs of an act of terrorism. The judges say they decided to give additional days considering the weight of the investigations.

A grenade exploded in the scuffle as a man tackled another man who tried to hurl a bomb in the direction of the Prime Minister at the June 23rd rally held in the capital Addis Ababa to support the Dr. Abiy’s sweeping reform initiatives. Two people were killed and over 150 people were injured in the explosion.

Over 30 suspects were arrested including the capital’s police commanders and security officials. The police chiefs who were accused of showing security lapse were released on bail last week.