Over 30,000 Ethiopian migrants have been displaced from Djibouti after an attack by ethnic Somalis, a ripple effect of the ethnic clashes in the Eastern part of the country. 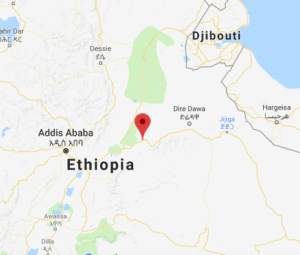 Speaking from West Hararghe, a witness told ESAT that the majority of the 30,000 Ethiopian migrants were ethnic Oromos who were targeted by the ethnic Somalis. The witness said he feared several people were killed and there were many who were still stranded in neighboring Djibouti.

He told ESAT that NGOs and the government have provided transportations to bring them to Ethiopia where they are sheltered in a school in the town of Asebot. Many have also been sent to their hometowns.

“The Ethiopian Somalis in Djibouti feel that the Oromos have attacked their kins in Eastern Ethiopia and had sought to revenge,” he told ESAT’s reporter on the phone from Asebot.

“Food and water are hard to come by,” the witness, who is also one of the displaced from Djibouti said.

ESAT’s attempt to reach government representatives for verification and comment was to no avail.

Over two years of sporadic ethnic clashes in Eastern Ethiopia, in areas bordering ethnic Somalis and Oromos, led to the death of hundreds and the displacement of over million people, the majority of whom were ethnic Oromos.

A special police unit called the Somali Liyou police were blamed for instigating and taking part in most of the attacks against the Oromos, who were also accused of retaliating with violence.

After last week’s removal of Abdi Illey, the notorious President for over ten years in the Somali region of Ethiopia, many a have thought the region has gotten a respite from deadly violence. But it seems the ripple effects are now affecting Ethiopians migrants living in neighboring countries.