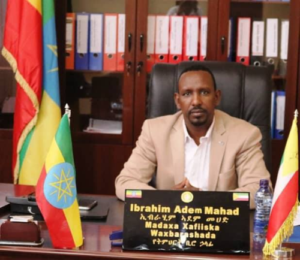 Ibrahim Adem Mahad, one of the ex-somali region officials arrested in Somaliland

Two former officials of the Somali region of Ethiopia have been nabbed in Somaliland as they were boarding a plane to Mogadishu, capital of neighboring Somalia.

Somaliland immigration officials have detained Ibrahim Adem Mahad, the former head of the regional education bureau and Abdi Jama former head of justice bureau. Both ex-officials worked under the deposed regional president, Abdi Mohamoud Omar, widely known by his nickname, Abdi Illey, who is reportedly detained in Addis Ababa. Local and international rights groups accused Abdi Illey of a range of human rights abuses, torture and high level corruption which he allegedly carried out in collusion with TPLF army generals.

Ali Samire Sigad, an activist from the Somali region, confirmed to ESAT that not only the two former officials were arrested in Somaliland but the search for six other officials of Abdi Illey is underway. The news first broke today by Somaliland Standard, an online news site which reported that the ex-officials told Somaliland immigration officials that they were traveling to Mogadishu for “trade purposes.”

Somaliland has been on heightened security after unrest broke out in neighboring Ethiopian Somali region that has seen its share of deadly violence and the removal of a regional administration led by Abdi Illey.

A congress of the Ethiopian Somali People’s Democratic Party and leaders of various clans that met in Addis Ababa announced yesterday that Mustafa Muhumed Omer will lead the region in a capacity of acting president. An economist by profession, Mustafa is an activist and a critic of Abdi Illey’s administration.