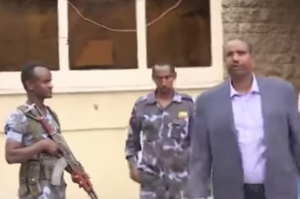 Six more officials of the Somali region of Ethiopia have been arrested after yesterday’s arrest of the ex-president of the region, Abdi Illey.

The arrests were made after the regional council has lifted legislative immunities of seven officials on Sunday.

The Federal police say the officials would be brought to justice and defend the allegations.

Abdi Illey and the six regional officials are accused of violations of human rights, inciting ethnic and religious conflict in the restive Somali region in Eastern Ethiopia.

The federal police yesterday picked up Abdi Illey from his residence in Addis Ababa where they have also found five kalashnikovs and four pistols.

Early this month the Liyou police, a special police force and a youth group aligned with Illey have killed at least 30 people and burnt churches and looted properties as pressure mounted on Illey to resign.

The Human Rights Watch and other rights watchdogs have been calling for justice in the Somali region of Ethiopia, implicating Abdi Illey and other regional officials in gross human rights violations as well as ethnic and religious strifes.