A delegation led by Ethiopian Foreign Minister Workneh Gebeyehu has arrived in the Eritrean capital Asmara to negotiate with a faction of the Oromo Liberation Front (OLF) led by Dawud Ibsa. 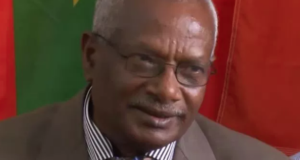 The report by the Ethiopian Television says the delegation, which also includes president of the Oromo regional administration, Lemma Megersa, was welcomed at the Asmara International Airport by Eritrean Foreign Minister, Osman Saleh and Presidential Advisor Yemane Gebreab.

The delegation is expected to iron out differences with the OLF faction that is based in Eritrea.

In July, Megersa accused that some groups were trying to destabilize his region under the guise of fighting for the rights of the Oromo people.

Megersa said last month that a group which he said was claiming to fight for the liberation of the Oromos has attacked security forces and ransacked public and private properties in the Western part of the region.

While most exiled Oromo political groups have returned home to be part of the ongoing political changes in the country, the OLF faction led by Ibsa has yet to mend fences with the government in Addis Ababa.

The delegation in Asmara hopes to convince the OLF faction to return home and join the peaceful political struggle, it was learnt.