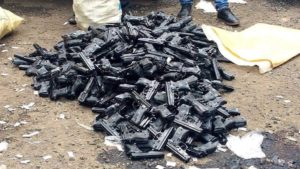 Federal police say they have intercepted over 1,000 pistols and about 4,000 munitions hidden in the tanker of a fuel truck.

Crime investigation head with the federal police, Ketema Debalkie told reporters that the weapons were smuggled into the capital but were intercepted following tips from the community.

The National Intelligence and Security Services in conjunction with the federal police have seized the weapons in the subdivisions of the capital called Kolfie and Addisu Gebeya as they were hidden in a fuel truck and an Isuzu truck, according to Debalkie.

Three suspects were also arrested and investigations were underway.

Early this month, police in Benishangul Gumuz regional state in Western Ethiopia have intercepted about 500 ammos for kalashnikov rifles in a public bus travelling from Goba to Asossa.

Meanwhile, custom authorities said yesterday that over 92,000 US dollars in cash and currencies of various countries have been caught at the Addis Ababa Bole International Airport. Authorities did not say if there were any arrests made in connection with the currencies that were caught at the airport while they were apparently being smuggle out of the country.