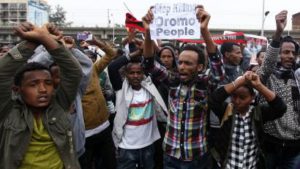 Ibsa Negeo of the Oromo Liberation Front (OLF) said at a press conference yesterday that his party has been in discussions with the Oromo Federalist Congress (OFC) and other parties to brainstorm on the possibility of forming a united front.

Negeo said his Front that is based in Eritrea and led by Dawd Ibsa will soon move to Ethiopia and will actively take part in the evolving political process in the country.

Mulatu says the Oromo people have been demanding that political groups should come together and create one front instead of having a number of parties that work for the same people and constituency.

The OLF and other opposition political groups had been declared terrorists by the previous TPLF led government but a reformist Prime Minister, Abiy Ahmed, who took office in April made a call to the opposition to be part of the political process in the country regardless of their political differences.

Laws that exclude and label exiled political groups have been scrapped since Ahmed took office paving the way for the opposition to take part in the next elections slated for 2020.